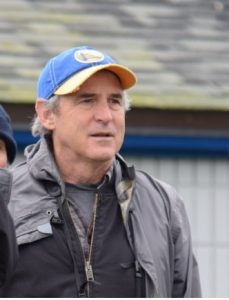 The Farallon Islands, part of the City and County of San Francisco, is a National Wildlife Refuge located 27 miles west of the Golden Gate Bridge. Cold ocean currents and other environmental factors there lead to high ocean productivity and a thriving marine wildlife ecology. Biologists working for PRBO/Point Blue Conservation Science and the U.S. Fish and Wildlife Service have resided on Southeast Farallon Island every day since April 1968, studying all aspects of the island’s environment and ecology. Peter Pyle spent over 2,100 nights at the island’s biological station in 1980-2003, primarily focused on birds, marine mammals, and white sharks, but also dabbling in everything else including bats, dragonflies, salamanders, butterflies, crickets, mushrooms, and, yes, even the island’s unique fog-whipped flora.

Peter’s talk will briefly cover the ecology and conservation of the islands’ marine vertebrates. He will then present a history of botanical investigation on the islands, his first successful attempt to key out a plant, and information on the approximately 45 each of indigenous and non-native species that have been recorded there. He will consider everything from the dominant and practically endemic “Farallon weed” (Lasthenia maritima) to pioneer scouts that have been recorded only once, to efforts at invasive species removal. He will also bring up for discussion the possible effects that the proposed eradication of invasive house mice may have on the islands’ flora.

Peter Pyle has worked as an ornithologist and marine biologist throughout the Pacific. During the 1980s- 2000s much of his research was conducted on birds and white sharks at the Farallon Islands. He is now an identification specialist and consultant for the Greater Farallones National Marine Sanctuary’s Beach Watch program. He is a Research Associate at both the California Academy of Sciences, San Francisco, and the B.P. Bishop Museum, Honolulu. To date he has authored or co-authored over 180 papers in scientific journals and four books, and has described a new species of shearwater (Puffinus bryani) and named it after his grandfather, Edwin Bryan. Peter currently works as a staff biologist for the Institute for Bird Populations in Point Reyes Station.

East Bay CNPS members meetings are free of charge and open to everyone. This month’s meeting takes place in the Garden Room of the Orinda Public Library at 26 Orinda Way, Orinda 94563, a few blocks from the Orinda BART station. The Garden Room is on the second floor of the building, accessible by stairs or an elevator. Email programs@ebcnps.org if you have questions.

Some of our past speakers were recorded and can be seen on our YouTube channel.

No events are currently scheduled. Check back here, or join our Meetup group to find out when events are scheduled.