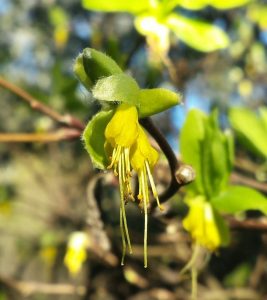 Naturalist Glen Schneider headed up ten rare-plant fans on the brisk sunny day. We met at the Tilden Steam Trains parking lot and walked the Skyline Trail to the south. This is EBMUD Watershed. Many of us know Glen as the organizer of the Skyline Gardens Alliance restoration project. The purpose was to observe the beautiful western leatherwood in bloom, and to learn more about the restoration activities of the CNPS-sponsored Skyline Gardens Alliance over the past four years.

Western leatherwood (Dirca occidentalis) is listed as California Rare Plant Rank 1B.2 (rare, threatened, or endangered in CA and elsewhere) and only grows in the hills surrounding San Francisco Bay; nowhere else on Earth! It is the only member of the Daphne family that grows in California.

We were there at the right time, with so many lemon yellow delicate flowers, and the leaves were just starting to shoot out.  So many were in bloom along the Skyline Trail, below the Steam Trains parking lot. 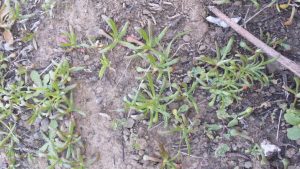 If that were all there was to the field trip, that would have been fine; however, there was a lot to see and talk about. Right across Lomas Contadas at the trailhead, we observed many little lupine plants coming up. These were fleshy lupine (Lupinus affinis), which was thought to be extirpated in the East Bay. Fortunately, Glen found a patch two years ago along Grizzly Peak Blvd, and now they’ve been carefully restored to this new trailside location, as well as several others spots on EBMUD Watershed. 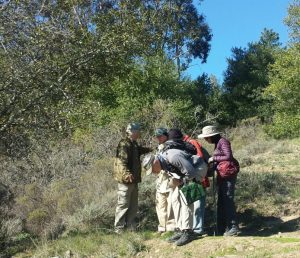 After wandering down the part of the Skyline Trail known as “Trillium Lane,” we stopped at “Siesta Nose.” There, we examined the restoration work the Skyline Gardens Alliance has conducted. Here is some of the group listening to Glen, and looking at the cobweb thistle (Cirsium occidentale) that has now taken hold there.

On the “Nose” we observed popcorn flower, chia, sticky monkeyflower, native thistles, and the rare native grass, Elymus ×hansenii. And to think, four years ago, this was an area that was mostly invasive Italian thistle, wild oats, and rose clover.

Down slope, we re-confirmed a population of an unusual member of the evening primrose family, the hill sun cups, (Tetrapteron graciliflorum). The flowers hadn’t come up yet, but the plants appeared to be thriving.

After this, we rambled off the beaten path and through areas that were full of Dirca shrubs. On one outcrop, we saw many strap leaves of the rare Oakland Star Tulip, Calochortus umbellatus. By the end of the ramble, we had shed many layers, and had seen quite a preview of coming attractions!

Trip leaders Glen Schneider and Michele Hammond, Botanist with East Bay Regional Parks, guided us to the protected, off-trail area. The hike started out rainy, and the trail was muddy. As we started the climb, the sun broke through, and the vistas were spectacular.

This population of fragrant fritillaries grows in a fenced enclosure of about an acre, to protect the blooming plants and seeds from cattle grazing. The area was fenced in in 2005. For 5 years, there was a tremendous rebound of growth, but without grazing, weeds began to choke them out. In the summer the enclosure is now opened to grazing, and Parks staff now mechanically mow the area after seed-set to help protect the population. Michele estimates this healthy population to number about two thousand plants!

Michele led into the enclosure, and we inspected the Frits, and did some botanizing. It’s a little early in the year, but we were able to identify about 15 species. Here we are inspecting the plants against the backdrop of Castle Rocks: 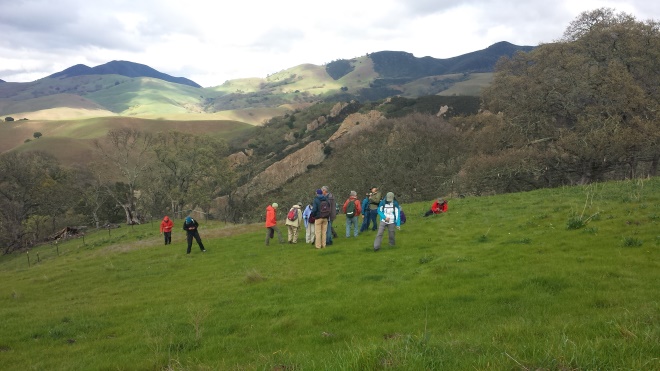 And here are the shy, downward facing fragrant fritillaries (click to enlarge). 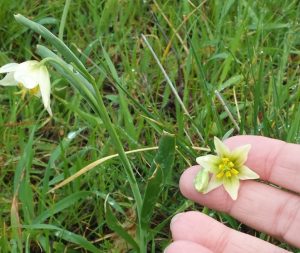 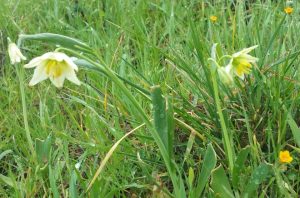 Michele led us to one other location where the Frits had also been mapped. The group found several plants in this spot that Celia Zavatsky had noted many years before.

The hike back was dry, sunny, and breezy. Another great day in the East Bay!

If you are interested in leading a Rare Plant hike, feel free to contact the Rare Plant Chair at rare-plant-chair@ebcnps.org.

No events are currently scheduled. Check back here, or join our Meetup group to find out when events are scheduled.